When you go to a grocery store, you see a package of ground beef labeled “80% Fat Free.” Would you buy it? Most likely you will. However, if that package is labeled “20% Fat,” most likely you won’t buy it. “80% Fat Free” and “20% Fat” are identical, but they trigger different emotional responses, leading to different buying decisions. 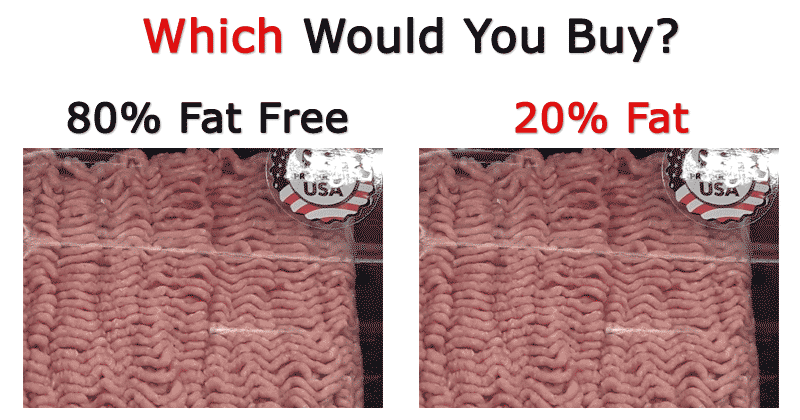 The Framing Effect is another cognitive bias that affects people’s decision-making and emotions. How marketing and sales presentations use language influences customers’ perceptions. Getting the framing right requires an in-depth understanding of the Neuroscience of Sales and Marketing.

For each group, both treatments offer identical outcomes. When framed positively as saving lives or negatively as losing lives, people’s choices were influenced. Clearly, the framing language made the difference. The decisions were made based on emotional reactions, rather than careful reasoning.

About 1% of the population has celiac disease, which is seriously aggravated by consuming food items containing gluten, a protein found in wheat flour and some other foods. Some others are also sensitive to gluten but less seriously. Books, articles, and social media have raised awareness of this, giving gluten a broadly negative reputation. “Gluten-Free” labels now appear on many products and menus to improve sales. Even plain bottled tea and meat, which never contain gluten, have been so labeled.

Apply the Neuroscience of Sales and Marketing

Does your marketing message project positive or negative outcomes? The Framing Effect is just one of the cognitive biases that influence people’s emotions. It interacts with other biases, like the outcome, anchoring, loss aversion and confirmation biases in complex and intricate ways. What you say is important. How you say it is even more important.

How buyers view what you have to say, and how that affects their emotional responses can make all the difference in their decisions. Since about 95% of all consumer decisions are based on emotions, rather than reason, it pays to take a second and third look at everything you do. When your sales and marketing are powered by Neuroscience and Neuromarketing, you can persuade your customers to buy.

Apply the Neuroscience of Sales and Marketing to Price Comparisons – How do you motivate buyers to buy higher-priced products and services? Neuromarketing research has shown that by making the price difference obvious, you shift buyers’ attention to the price increase, instead of the total price of the more expensive item. This attention shift results in people choosing the more expensive item.
Request a FREE Consultation