We are more likely to mimic an action after seeing 3 people doing it once than seeing 1 person doing it 3 times. The human brain evolved to rely on decisions made by others for safety and efficiency.

Historically, when the circus came to town, a parade was held. After the tents were erected and before the first performance, colorful horse-drawn wagons went down small-town Main Streets. Animals, clowns and performers rode on horseback and in wagons. 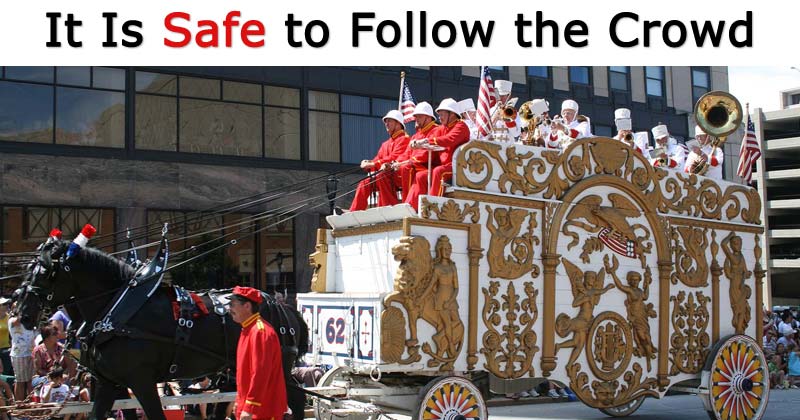 The last wagon in the parade carried the circus band. When the bandwagon went by, the crowd followed the music and parade to the big tent. That’s the origin of the name of this universal human bias.

Why We Copy What Others Do

It has been known for centuries that people follow the lead of others. Sticking with our fellow humans has deep roots in the most primitive parts of the brain. Early in human history, survival depended on the power of groups acting together.

When we observe others taking some action, we often put aside our logical analysis and let our fast-thinking emotional brain take over.

Social scientists and psychologists have been studying the bandwagon effect for decades. It explains fads, crazes and even the behavior of soldiers who rush into battle, despite the extreme risks. We follow the crowd. That’s why social proof influences consumer decisions. Today, Neuromarketing further explores this bias’ impact on marketing in many ways:

Jump on the Bandwagon to Draw a Crowd

In old-time circus parades, the lively music and colorful images on the bandwagon were important in attracting an eager audience for the performance. Online, people will follow the crowd to your business, too, but you must create a virtual crowd they can envision. Through crowd-sourced content and references to your popularity, you can stimulate the bandwagon effect in your internet marketing. Need help? Our Neuromarketing firm can show you a wide range of proven ways to stimulate sales.